It looks like you're visiting us from outside Hong Kong

NEXT DAY DELIVERY TILL 8PM

Any daypack is meant to be able to carry enough gear for 24 hours while being light in weight and comfortable, but with the Snugpak Xocet 35 Backpack you not only have those aspects as there are other practical features and plenty of durability too. A tough 500 Denier heavy-duty Nylon is used for the main fabric so can stand up to plenty of repeated use and the environments this Snugpak bag is likely to be used in. A 35 litre capacity includes not just the main compartment but an organiser section, plus a water bottle holder as well so gear can be stored practically and easily found. Each Snugpak Xocet 35 Backpack also comes with padded adjustable shoulder straps for lasting comfort throughout wear.
Water Bottle Pocket - Features one or more pockets for water bottles, allowing easy access to fluids at all times, without the need to rummage in the main compartment of the rucksack.

Appears well made and sold, larger than I thought it was going to be but big enough for day to day and as a carry on. Hoping I have a bag that is actually going to last!

This is a rather cheap rucksack in my opionion. It got good compressionstraps, two on each sides wich it's really good because instead of just compressing to top, you get a flat backback when you compress this one. Another good feature is that mos

This is the best daysack i use at the moment. Ikeep itin he bootfor both work and leisure use. 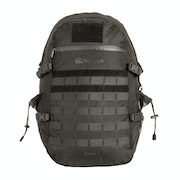