NEXT DAY DELIVERY TILL 8PM

Features:
Made from strong and durable materials.

Used the Rush Tier system as compression straps on my new Rush 24 backpack and it worked a treat. Highly recommended.

Wonderfull straps using it to hold steady the front loose pouch of 5.11 rush 72 bag which flops down no matter how much u tighten up the straps which come along. Really works very well and has given a new look to my bag. Fantastic idea got it from you tube.

Bought these to attach a tripod to my Rush72 - does the job perfectly, providing a flexible & adaptable way to attach the tripod to the bag.

Excellent Product!! Straps, adaptable within the h 5.11 system for numerous purposes other than for moab system.

Excellent Product!! Straps, adaptable within the h 5.11 system for numerous purposes other than for moab system.

I bought the tier system to allow for a second compression strap to the bottom of my rush 12. The quality of the tier system is excellent and matches the colour of the rush 12 perfectly.

Not using as tier straps, but make great compression straps on a Rush 24 to keep it nice and slim when not fully loaded. Price a bit steep, but 100% match for the 5.11 bag and existing straps/clips so had to be done.

Bought this with a RUSH 12 (also own a 72). Looked at using it for Tier style joining of the 2 but this ends with a fairly cumbersome item. Fine if you're just throwing it in and out of transport but not so good for carrying. The straps are very good as compression straps for both bags though. The 12 benefits from them more than the 72 due to it only having built in straps high on the pack.

Does the job, easy to fit, strong and durable

Does the job, easy to fit, strong and durable

Great straps, bought them to use as compression straps on the bottom of my RUSH 24 and they do the job perfectly!

Very adaptable. Can also be used as utility straps

Very simple and very effective way of securely attaching a MOAB to another pack or load bearing vest with MOLLE/PALS loops. 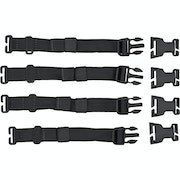